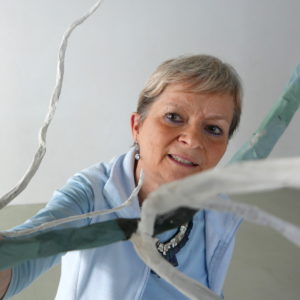 An unusual career, very different from most artistic paths…

Painting and creation in general have always occupied the artist’s life. After law studies at the University of Lausanne, during which she always had her brush to hand, followed by a doctorate, in 1983 she went to the Istituto per l’arte e il restauro in Florence in order to get back to the ‘essentials’ as they were taught at the time. Having qualified as a lawyer, she took a sabbatical year in order to devote herself entirely to painting. She spent a good part of that year in New York, at the studio of Richard Pousette Dart, the youngest representative of abstract expressionism. On her return, she divided her time between practising at the Bar and painting, finally deciding in 1993 to give up her law practice and paint full time.

…and creation which is open to current environmental problems

The artist has always wondered about the ‘mysteries’ of the creative process: how can it be nourished, how can you free yourself from the intellect’s restrictive injunctions whilst accepting those that are necessary, the role played by ‘accident’ in that process… On such questions, nature, observation of it and of its creative ingenuity have been and remain her guides. Trees in particular, stretched between two opposing forces, both vital for its growth, have always filled her with wonder. During her time in New York, she painted them incessantly, at the same time rooted in the earth and touching the sky. She has continued to be inhabited by them ever since, even during her most abstract creative periods. Since 2010, trees have once again made their presence felt and are at the very heart of her aesthetic research. Trees invite us to marvel at the complexity of nature and take inspiration from it to try to solve the environmental problems threatening our planet.

In 2018, the artist decided to contact researchers in order to share with them her dazzling insights and her environmental concerns, and develop a synergy that might be accessible for the general public.  In 2021, the exhibition between art and science “AND WHAT ABOUT TREES TOMORROW?” at the Espace Arlaud, a museum in the center of Lausanne (Switzerland) gave concrete expression to this new departure.